It’s important to recognize that the tax cut has, so far, reduced revenue compared to how much the federal government would have collected in the absence of the tax cut. But, total federal receipts are likely to end the current Fiscal Year up slightly from last year and at a record high. Next year, according to the CBO, revenue should be up 4.6% and at another record high. Note that in April Tax Revenues increased 13% over 2017 amounts.
In other research, the tax cut didn’t lead to an outright reduction in revenue, it just slowed the growth of revenue. 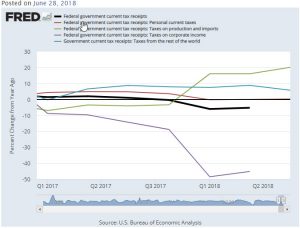